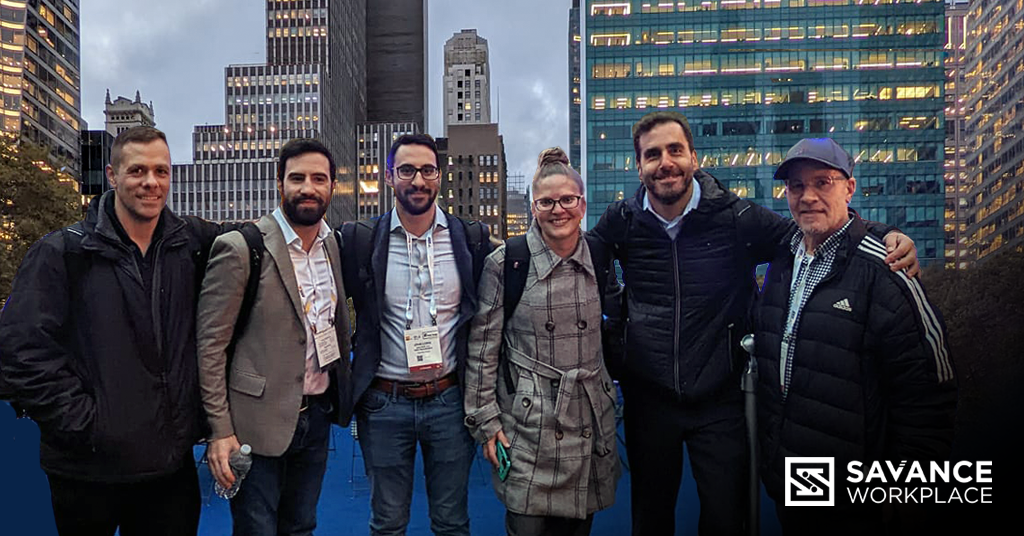 I was particularly excited for ISC East this year. Probably not for the reasons you might guess though. This year, I was excited about two things: First, $1 pizza slices in New York, and second, quality time with my team. As we continue to grow, and more people work remotely, it becomes harder and harder to really get a chance to spend quality time with your co-workers. This has become a common issue amongst organizations since the pandemic. So this year, we sent most of our sales team and one of our engineers so they would not only get a chance to gain more exposure to the industry that we’re a part of, but they’d also get a chance to spend time with the team, and meet many of our partners that they’ve only had a chance to talk on the phone with.

Now, I’m not sure what was better to me – the $1 pizza slices or the time with the team! That’s how much I enjoy a fresh slice of NY pizza. I took the team on a pizza crawl to feed my addiction. The cheaper, the better. It tastes so amazing. Still though, spending time with the team was even better. It definitely fuels my passion for what we’re doing and gives me a chance to share that passion with my team.

During the pandemic, attendance at the shows as they reopened was pretty bad. The hot products revolved around health screening. Years before that, it seemed active shooter technology and droid detection and capture was hot. Now, it seems like the focus is on anything layer 2 – using physical security products like physical access control and video surveillance technology to connect to deeper safety, security, and operations improvements throughout the organization. For example, using AI (artificial intelligence) built into the video surveillance to identify someone carrying a gun. Using AI to identify faces to find someone in real-time. Leveraging physical access control to know who is onsite and notification hardware like LCD displays, PA systems, and combining that with software technology to send out mass notifications via SMS, text, email, and other various methods, then using that to do emergency roll calls, musters, or people counting to quickly find out who is missing.

The Workflow of the Dream Organization

It really excites us to combine these technologies. Imagine the workflow of the dream organization that really cares about health and safety, and takes OSHA standards seriously. So much so that they leverage technology to empower them to keep their people as safe as possible. It all starts with a cloud-based, browser-based access control system. Staff wear traditional badges for identification but can simply wave their hand or carry their mobile phone for access. Cameras connected to the cloud video surveillance system detect people as they walk through the building and notify security when someone known or unknown is detected in areas where they have not been just recently granted access to.

These systems work in tandem with the Savance mustering system to track which staff are in the building and specifically the last location they swiped a badge or were detected by a camera. A status board in the lobby shows a list of staff and visitors showing pictures, occupancy status, extension, department, and job role mixed with company information, weather, news, and announcements. The Savance visitor management system allows pre-registration information to be sent right from an employee’s e-mail to the guest or contractor allowing visitors to watch a safety video, sign an NDA, upload a picture, and add their cell phone number. Instructions for where to park are emailed and texted to the visitor along with a QR code that gets them into the parking garage. That same QR code allows them to scan it at a kiosk, scan their driver’s license, get a recent picture, and validate that they are who they say they are, and that they’re not on any terrorism or other concerning lists based on the type of organization. A professional name tag is printed that automatically expires in 24 hours with an identifiable “EXPIRED” red mark. The host is alerted via SMS and email that their guest has arrived. The surveillance system uses the pre-uploaded picture and the most recent picture to track the visitor or contractor throughout their visit to not only know where they are at all times, but also to alert someone if they go or do something outside of what your organization has defined as expected.

Heaven forbid an emergency takes place, but if it does, the Savance notification system can send a notification via SMS, email, and a popup on computers notifying people of the emergency and actions to take. Staff and visitors can respond with status information helping emergency responders to collect and summarize who is ok, who may need help, and who has not yet responded. Muster tablets equipped with badge readers and QR code readers quickly account for ONLY people who are in the areas of concern in an effort to expeditiously identify who is missing. This mustering information is combined with staff and visitor responses or lack of responses to the original alert to help paint an even better picture of the situation for emergency responders. Finally, those of concern who are still missing can be identified on the tablet based on their last location detected from a badge scan at a door or from the AI built into the surveillance system. Along with this, a recent picture is available, contact info, and more are immediately available helping emergency responders make time sensitive life decisions for themselves and those that they need to find and potentially save.

It sounds like something of the future, but the technology is there today. Savance has even taken it a step further to integrate with life safety systems to lock down muster stations so people know to clear certain areas when a sensor detects a gas leak for example and use another muster station.

It’s exciting times actually! For years, we’ve been hoping technology would catch up to our vision. We thought RTLS and RFID were going to be the leading technology to bring this to life. We had tested and implemented both technologies in past projects, but could never exclusively recommend the technology knowing its reliability for 100% presence sensing was flawed. We are now convinced that physical access control and AI in video surveillance are the ideal solution. We have always been firm believers that physical access control and policy of having people badge in and badge out was the best-case scenario for detecting presence to drive a muster or roll call. However, this still does not give you the granularity of where employees and visitors are within the building as they move throughout a larger facility. Organizations are already investing in cameras and naturally building a blanketed infrastructure for surveillance. So what’s nice about this is that physical security and surveillance become the foundation for not only security, but also for staff and visitor safety. How cool is that?