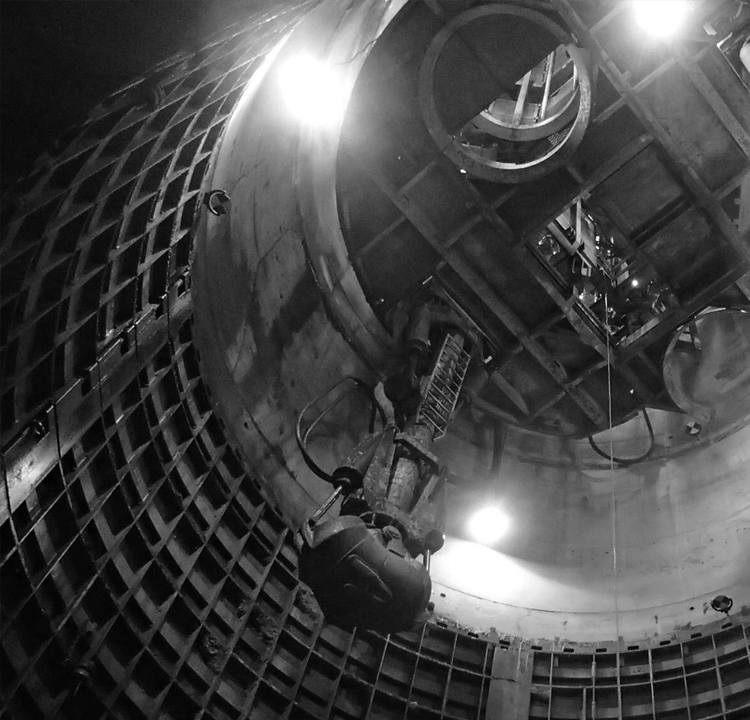 Savance is really easy to work with. People there want to see the solution work for you. They will work with you through any challenges.

It looks sleek, clean, and professional when someone comes into our office. We don't look like a little mom and pop shop trying to run a business, but have a much more sophisticated look now.

I knew Savance had a great product, and that they also provided the service level that would separate them from any other product suppliers. Right from the start, they ask the right questions to determine the client's primary pain points and uncover exactly what hardware and software will be needed to solve them.

As an integrator, we can't be an expert at every product and solution we sell. Instead, we rely on great partners like Savance to help guide the customer toward the right solution.

We don't want to be outdated when it comes to technology. We wanted to move towards a more sophisticated look.

With headquarters split into multiple locations, Thyssen found that keeping track of employees was becoming more difficult as the organization grew. “We had people always visiting the Shop, or the Engineering building, or our Main Office,” explains Mike Selinger, IT Manager at Thyssen Mining. “We needed to find a way to capture a live view of where those people were.” 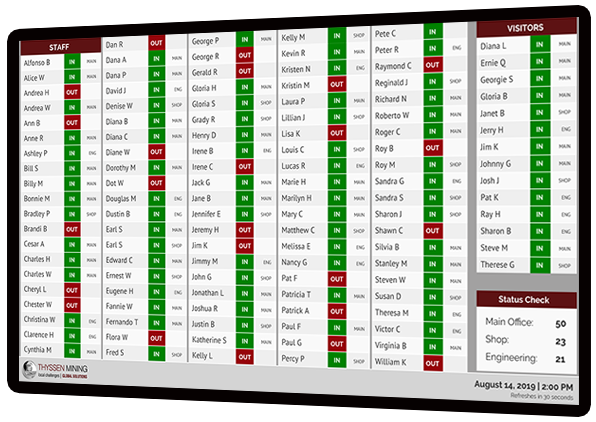 Previously, Thyssen used a magnetic in out whiteboard in each area; however, this solution was not very useful when it comes to visibility, as it would only show the people who were normally in a particular location. “Magnetic whiteboards work fine if you’re in that area and walk right by the whiteboard,” says Selinger. “The problem for us was that the Shop, for instance, only listed the Shop people, and if someone visited from the Main Office, there was no record of them being there.”

In addition to poor visibility, Thyssen Mining wanted to move away from the old-fashioned nature of a magnetic in out board. It was simply not the image the organization wanted to portray. “We don’t want to be outdated when it comes to technology,” Mike Selinger explains. “We wanted to move towards a more sophisticated look.”

“We needed to find a way to capture a live view of where people were.”

When starting the search for an electronic whiteboard replacement solution, Thyssen Mining had some very specific criteria in mind. Access control integration was at the top of the list. “We wanted the solution to update in real-time so that it could follow a person around based on where they swiped in or out,” says Mike Selinger. “We already had electronic readers on most of the doors coming in and out of the buildings, and wanted to know where a person was just based on where they swiped their badge.”

In addition to integrating with its Lenel OnGuard access control system, Thyssen also wanted to display employee statuses on large 55-60″ customized displays mounted in each area. The same information should also be viewable by people from their computers or their smartphones.

“I saw that they had an old magnetic status board, and with their expanding staff, I knew they would benefit from an Electronic In Out Board”

Thyssen Mining first started to look for an electronic replacement to its magnetic in out board a few years ago through a company that was working on their security system at the time. “They proposed a very rudimentary system that did not meet any of our needs,” explains Mike Selinger. “It was also very expensive for something that was limited to a basic in and out, so it fell off the radar pretty quickly.”

Later on, security integration firm Delco Security took over working on Thyssen Mining’s security system, and Selinger revisited the subject of upgrading the outdated magnetic in out board. “When we started working with Allan at Delco Security, I asked him, and he said he had dealt with Savance before on a similar system.”

When first visiting Thyssen Mining, Delco Security’s Allan Mallard immediately had the same idea. “I saw that they had an old magnetic status board, and with their expanding staff, I knew they would benefit from an Electronic In Out Board,” he explains. “Beside the attendance at glance, there would be an opportunity for them to grow into Emergency Mustering and Visitor Management down the line.”

Having worked with Savance in the past, Allan Mallard at Delco felt good making the recommendation to Thyssen. “I knew Savance had a great product, and that they also provided the service level that would separate them from any other product suppliers,” says Mallard. “Right from the start, they ask the right questions to determine the client’s primary pain points and uncover exactly what hardware and software will be needed to solve them.”

“I knew Savance had a great product, and that they also provided the service level that would separate them from any other product suppliers”

Based on Delco’s recommendation and after meeting with Savance, Thyssen Mining decided to move forward with the project. “The system seemed to be able to do everything we wanted it to do, and the price point was acceptable”, says Mike Selinger. “Technology-wise, it looked a lot better than any other solution that we looked at.”

With its Savance solution, Thyssen was able to check all of the boxes from their wish list:

Thyssen Mining was Savance’s first integration with Lenel OnGuard, and due to a slow certification process with Lenel, this delayed the implementation of Thyssen’s new Savance system significantly. Lenel required official certification for the customer to use the feature in production; however, they were in no particular hurry to do their part to make this happen, something that led to a frustrating situation for everyone involved. Once the certification process was complete, the rest of the implementation continued without any major issues. This included a fully custom design for Thyssen’s new electronic status board.

Once the Savance Graphic Designer had completed the design based on Thyssen’s original vision, Thyssen decided they would rather see less information listed for each person, in order to combine the three boards into one. Because of this, the design was changed from a card-style layout with full names, statuses, status locations, return times, and optional comments, to a row-based, multi column design that showed only first name + last initial, color-coded in or out status, and current location. In addition, a status counter was added to the final design, showing the total number of people currently in each location. This would primarily serve as a tool to assist with nighttime lockup and closing.

“The Savance team was really good to work with as we were going back and forth tweaking the design to get it just right for our needs,” says Mike Selinger. “Dan in the implementation team had some small quirks that he had to work through, but he was very responsive and resilient to the issues.”

Despite the initial Lenel-caused delay, Thyssen is happy with the solution and the service provided by Savance. “Savance is really easy to work with,” Selinger says. “People there want to see the solution work for you. They will work with you through any challenges.”

“People there want to see the solution work for you. They will work with you through any challenges”

Delco Security was also happy with how the project turned out. “Once we secured the order, Savance stepped up even more,” says Allan Mallard. “They certified their product’s integration with the customer’s Lenel ACS system; created our client a first-class custom design; managed the project; and handled the deployment as if they were just an extension of Delco.”

Since implementing its Savance solution, Thyssen has seen improvements in several areas, including improved visibility and time savings. “Employees are able to tell at a moment’s glance whether someone is in the office or not,” says Mike Selinger. “There were a lot of smiles on people’s faces once we got this going.”

Another benefit of the Savance solution has been improvement to Thyssen’s overall image. “It looks sleek, clean, and professional when someone comes into our office,” Mike Selinger says. “We don’t look like a little mom and pop shop trying to run a business, but have a much more sophisticated look now.”

A benefit that nobody was expecting is that the solution was implemented only a few months before the COVID-19 pandemic hit, forcing businesses all over the world to change their processes and add the option of working from home. “An unexpected benefit was the visibility into people working remotely due to the coronavirus,” says Selinger. “We could add an option to select ‘Home Office’, and be able to see all the people who were working out of the office. Having that visibility into people when you can’t see them physically is a very nice thing.”

Thyssen Mining also likes the available opportunities to expand the system, moving beyond just tracking employee statuses. “We like that we can expand the system in the future, with a safety solution like Emergency Mustering or self-service sign in kiosks for visitors and contractors,” says Selinger. “There is a lot we can do with the system beyond just the visual display of who is in and out.”

Delco Security is also excited about future opportunities to work with Savance, both for Thyssen and for other customers they serve. “As an integrator, we can’t be an expert at every product and solution we sell,” says Allan Mallard. “Instead, we rely on great partners like Savance who are the experts to help guide the customer toward the right solution – and, in this case, one that starts off with just an electronic in/out board with a status board display, but with a phased in plan to grow into Mustering and Visitor Management. That’s the kind of partner we want by our side.”